The bio-based filament is made from a mixture of polylactic acid (PLA) and polyhydroxybutyrate (PHB) to achieve improved toughness and temperature-resistant properties. It can be used over and over to adhere to the principles of a circular economy.

As soon as an object printed with NonOilen has reached the end of its life cycle, it can be completely broken down into biomass, water and carbon dioxide (CO2) when disposing of compost or food waste or sent back to Filamentum for recycling. The company has also joined the DHL GoGreen program to neutralize its carbon footprint with every NonOilen package sent through the delivery service.

According to the company, the driving force behind the development of NonOilen was to reduce the use of fossil fuels such as oil to create 3D printable filaments and reduce the company’s ecological footprint on the planet.

NonOilen is made from a mixture of PLA and PHB to improve toughness and temperature resistance. Photo via Fillamentum.

Development of a fully bio-based and biodegradable filament

Previous attempts to improve the biodegradability of plastics included the manufacture of oxo-bioplastics, in which standard polymers were modified by adding substances that cause degradation in the presence of oxygen. However, these oxo-bioplastics cannot be sufficiently broken down in the compost, since secondary microplastics, which arise when the plastic decays, can have harmful effects on the environment such as the soil or oceans.

To solve this problem, according to Filamentum, new ways of breaking down such polymers must be discovered. In addition, new sources need to be found to replace fossil resources in the production of biodegradable polymers with high quality inputs and improvements in waste treatment.

To this end, the company’s newest 3D printing filament, NonOilen, has emerged from a long-term partnership with the research team of Professor Pavol Alexy from the Slovak Technical University in Bratislava, Slovakia. The filament is 100 percent biodegradable and all of the polymers used in its manufacture are completely bio-based.

Once an object has reached the end of its useful life, it can be placed in industrial or household compost bins for food waste, which degrades about three times faster than standard PLA. The PHB in NonOilen acts as an initiator for the degradation process, which allows bacteria to depolymerize and metabolize the polymer more quickly.

Alternatively, when the material is sent back to Filamentum, it is recycled and reused several times while maintaining its mechanical properties. 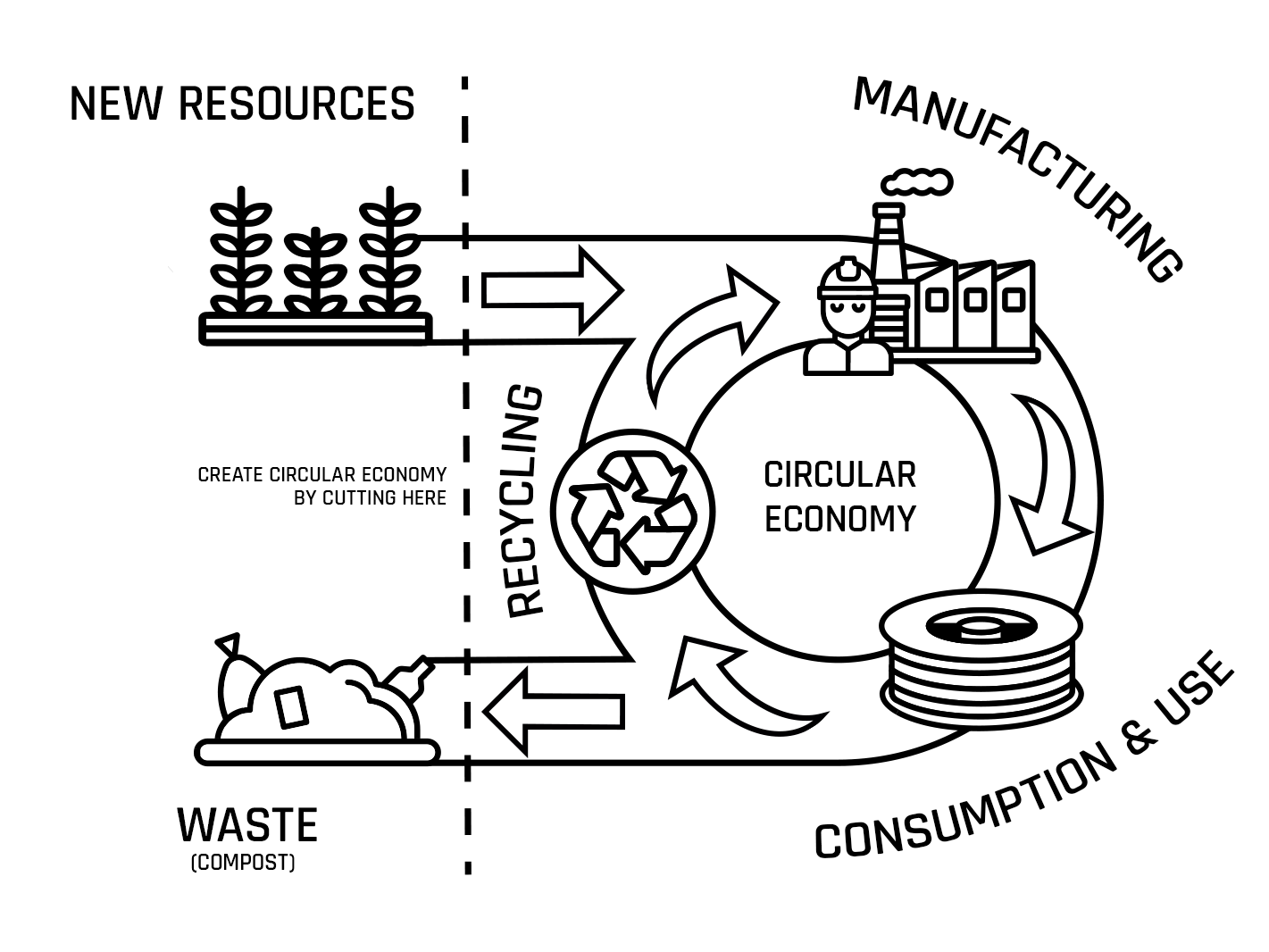 The principle of a circular economy. Image via Fillamentum.

In addition to its biodegradable properties, NonOilen also has improved toughness, hardness and strength properties compared to standard PLA due to its PHB content.

One of the main advantages of the filament is its temperature resistance of up to 110 degrees Celsius after 3D printing, so no annealing is required. NonOilen is easy to print, supposedly comparable to the ease of printing with standard PLA, with parts having a smooth surface with a natural silk look that is translucent in a thin layer when printed.

Objects printed with NonOilen have a long service life and are harmless for food contact applications. The filament can also be used to make 3D printed electrical components and electronic devices.

According to Filamentum, NonOilen can retain its mechanical properties even after “repeated” recycling. This is an improvement over the company’s other biodegradable filaments, PLA Extrafill and PLA Crystal Clear, both of which exhibit at least some loss of mechanical properties when recycled. In addition, the material outperforms the company’s Timberfill filament, which is biodegradable but cannot be recycled.

Objects printed with NonOilen are harmless for food contact applications. Photo via Fillamentum.

Fremach, a global supplier of complex plastic components for the automotive market, has tested the NonOilen filament from Fillamentum in the manufacture of control gauges and gears. The company chose the material because of its resistance to high temperatures and its full recyclability. This is a welcome benefit when printing a large number of these components.

The gauges are used to check the positions of symbols on decorative parts that are no longer used after their purpose has been fulfilled. The recyclability of NonOilen is therefore a great benefit for the company and enables Fremach to significantly reduce waste. The 3D printed gears are part of a rotating system for painting cylindrical parts, and here Fremach welcomes the filament’s ability to withstand the high temperatures the gears are exposed to in the pant shop oven without deforming.

“The benefits of 3D printing are obvious and are becoming increasingly important to our business,” said Miroslava Pribylova, process engineer at Fremach. “In addition, Fillamentum’s ecological thinking motivates us to bring our own steps closer to nature.”

In collaboration with Fillamentum, Fremach will regularly collect and recycle unused parts made from NonOilen materials for use in its own production. Starting today, Fillamentum is available for purchase and shipping.

NonOilen retains its mechanical properties even after repeated recycling. Photo via Fillamentum.

Subscribe to the 3D printing industry newsletter for the latest news on additive manufacturing. You can also stay connected by following us on Twitter and liking us on Facebook.

Looking for a career in additive manufacturing? Visit 3D Print Jobs for a selection of roles in the industry.

The picture shown shows that the Filamentum NonOilen filament is bio-based and completely biodegradable. Photo via Fillamentum.