Sustainability and environmental responsibility are becoming increasingly prevalent drivers of technology trends in the automotive industry. Low-energy and low-emission vehicles have become a priority for the international automotive sector, and trends toward alternative transportation technologies such as electromobility and urban air mobility (UAM) are gaining momentum. OEMs are looking to emerging materials and processes as an enabler for these prospective modes of travel, but change in the automotive sector is often slow going. For new materials and processes to be fully adopted, they must not only be qualified, they must be cost-effective and they must enable high-volume production. 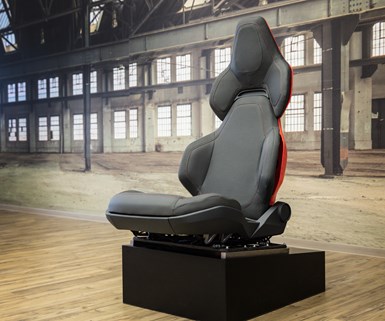 Recently, an innovative project with potential for the automotive sector — as well as emerging markets such as hypercars and air-taxis — demonstrated how new materials, processes and technologies, and close collaboration between companies, might enable next-generation modes of transportation. The goal of the project was to completely rethink a car seat using cutting-edge generative technologies, and to do this using only as much of the right material as needed in the right place — and to yield results quickly. The resulting ultra-lightweight, metal-composite hybrid vehicle seat prototype was developed, from design to manufacture, in just seven months, through a simulation-driven design approach, agile project management methods and close cooperation and system integration between the companies involved.

The collaborative project resulted in a seat prototype with a weight of a little over 10 kilograms, which includes the cushion, structural frame, functional inserts and the seating console that allows it to be mounted to a vehicle. The seat is 20% lighter than comparable lightweight seats on the market, many of those being aftermarket seats. According to ULBS project leader Stefan Herrmann, who is responsible for lightweight design at CSI, there are currently no competing seats on the market that weigh less than 12 kilograms.

“However, a direct comparison is often not apples-to-apples, because aftermarket seats often do not include the seating console in the weight definition, “ says Herrmann, “Also the seating comfort of the ULBS is a lot higher compared to seats with similar weight. Existing seats are often bucket seats, which are even lower weight but not that comfortable, or traditional supersports seats, which have a lot higher weight.”

The ULBS features several innovative technologies, of which the fiber roving skeleton structure based on process technology xFK in 3D plays the most prominent role. (See “Filament winding, reinvented” for more on xFK in 3D and other filament winding technologies.) The fundamental importance of the award-winning technology for endless fiber roving deposition lies in its freedom of design, in the simulation-driven and material-optimized fiber placement exactly in load-direction as well as in the simple, cost-efficient and waste-free application of fiber material. For the load transfer in this framework structure 3D-printed parts have been used. In areas with the highest loads, such as the backrest fitments, the seat uses 3D-printed structures made of stainless steel with high strength and high modulus. In lesser loaded areas, aluminum 3D-printing is used.

csi entwicklungstechnik, an engineering company specializing in vehicle body-in-white (BIW) structures, as well as automotive interiors and exteriors with business areas including carbon fiber-reinforced polymers (CFRP) and additive manufacturing, oversaw and coordinated the project based on the idea initiated by AMC. csi provided the styling, surfacing, concept, simulation, design engineering and project management for the project.

He stresses that what makes the ULBS project noteworthy is not only the use of innovative materials and manufacturing methods, but the development of a complex part that comprises new component designs within a short seven-month timeframe using close collaboration among partners. 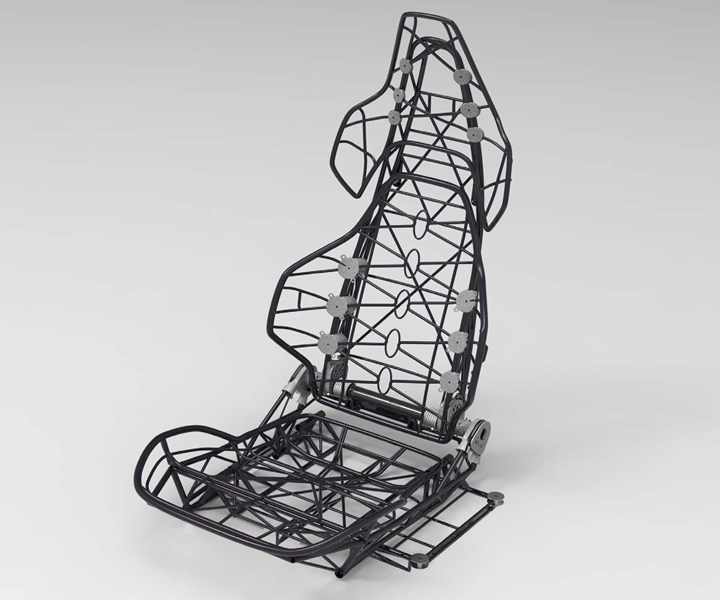 Much of the weight reduction in the ULBS project results from AMC’s xFK in 3D, a highly flexible, configurable, cost-effective and sustainable fiber composite technology for winding components..

xFK in 3D has already been used for a variety of products and applications for various industries and market segments. SGL Group Wiesbaden, Germany) displayed several automotive and bicycle parts manufactured via this technology at the international composites show JEC World 2018. One of the displayed parts, a carbon fiber bicycle chain ring developed by AMC, is said to cut weight up to 70% compared to an aluminum version. 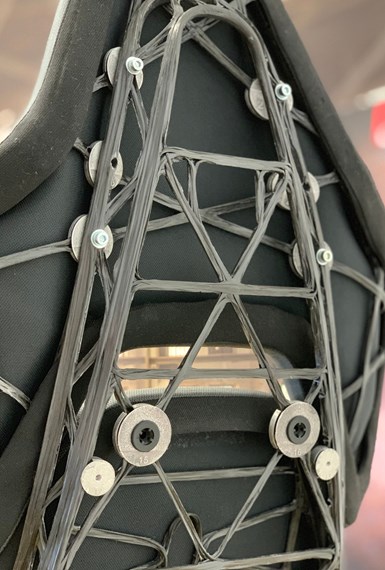 Winding bushings. A thermoset resin-impregnated fiber roving is wound around a positioning fixture, allowing fibers to be arranged to match each part’s loads and desired functions.  Source | csi entwicklungstechnik

The xFK in 3D process winds load-bearing structures in a waste-free manner using thermoset resin-impregnated continuous fibers. A fiber roving saturated with epoxy resin is wound around a positioning fixture, or winding bushings, allowing fibers to be arranged specifically to match each part’s loads and desired functions.

“One major benefit of xFK in 3D is the elimination of weak points regarding load transfer and load introduction in structures,” says Herrmann. He explains that weak points are often not in the continuum of the structure, but in the areas where loads are introduced into the structure, especially where neighboring components are connected to the structure. The xFK in 3D technology enables load transfers across connections and allows fibers to be aligned according to the desired component functions and load cases, and manufactured in three dimensions.

The filament winding process yields additional benefits as well. The process helps to minimize material waste — less than 1% of the fiber roving is wasted.

csi recognized xFK in 3D’s strengths and designed the ULBS seat frame to be constructed under the consultancy of Dr. Clause Georg Bayreuther, technology head of AMC.

“Working with csi engineers, AMC consultants and Alba’s tooling experts developed this concept and structure for the seat frame to be manufactured using the xFK in 3D process,” says Peter Fassbaender, technology consultant and initiator of xFK in 3D technology.

Alba manufactured the tooling for the CFRP seat frame and provided engineering support. Also, although the seat frame was wound from carbon fiber, natural fibers or basalt fibers are also good candidates. 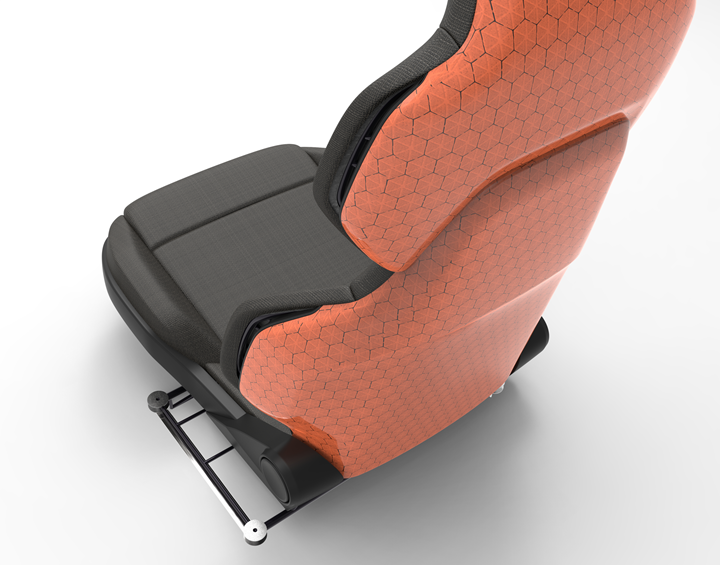 New technologies. The ULBS prototype uses a combination of new technologies including a back panel shell made of intralaminar reinforcing core (IRC) material, and 3D-printed seat backrest cushions made from thermoplastic polyurethane (TPU). Source | csi entwicklungstechnik

In addition to the frame, the ULBS prototype includes several other new innovations. Alba, which supplied the tooling, also supplied the tooling, engineering and manufacturing for the foam body of the seat and executed the seat’s assembly. A fiber fleece mat covers the seat’s CFRP frame which is then covered by a 3D-printed PUR foam cover. The seat cushion area is made from traditional foam.

Further weight reduction was accomplished through the use of 3D|CORE, an intralaminar reinforcing core (IRC) material, inthe back panel shell structure of the seat backrest. The material is an intra-laminar reinforcing core (IRC) material — a structural sandwich core that comprises extruded polystyrene (XPS) and polyethylene terephthalate (PET) foam core bodies in an integrated honeycomb pattern. During the production of composite parts, the honeycomb﻿﻿ structure is filled with resin, resulting in high intra-laminar strength. The 3D|Core is assembled between two layers of glass fiber to create a preform, which is infused with thermoplastic epoxy resin using vacuum assisted-resin transfer molding (VA-RTM).

Covestro supplied its Dispercoll adhesive as a binder for the fiber fleece mats, as well as the 3D-printed backrest cushion. According to Herrmann, Dispercoll’s mechanical properties provide good abrasion resistance, which is important because surface contact between the cushion and frame can subject the fleece to wear over time.

“If you have a single fiber roving, when you put that into a textile, you get micro-movements between the hard CFRP parts and the fleece mats. The seating frame components can rub against the textile and destroy it,” explains Herrmann.

Traditional seats typically have a larger surface area supporting the cushioning, and do not have this problem.With xFK in 3D, however, there is a smaller contact surface area due to the frame structure.

“When xFK in 3D structures push against the fleece fabric, you must have a specific and durable binder; this is what Dispercoll provides in this context,” adds Herrmann.

Covestro also supplied what is said to be the world’s first 3D-printed cushion. While conventional and tooling intensive foam is typically used in seat backrests, the use of the 3D-printed seat backrest cushions, which are made from TPU (thermoplastic polyurethane), further increases the flexibility and adaptability of the ULBS seat with regard to its aesthetics, functional integration options and comfort.

A seat for the future

The ULBS project accomplishes several goals. The resulting concept, while not yet on the market, has the potential to serve numerous niche markets such as hypercars, air-taxis, ultra-lightweight vehicles, micromobility, helicopters, multicopters and aviation. W﻿hile admittedly more expensive than production car seats, the ULBS demonstrates several technologies that minimize waste, thereby lowering material costs. I﻿﻿n comparison to other carbon fiber technologies, xFK in 3D yields a very low amount of waste. In fact, the﻿ entire project is aimed at using minimal resources and only the necessary minimum of the material. The ULBS also offers the possibility of using renewable and sustainable resources such as natural fibers in the frame structure, cushions and textiles.

But more importantly, the project demonstrates how companies can minimize time to market by working together through short and agile coordination procedures. It’s also a good example of using design thinking to successfully take a product from idea to hardware prototype by focusing on the functional requirements and looking ahead to future applications and sustainability goals.