Of the six new printers from WASP, five are polymer machines that have been optimized for depositing certain filament or pellet types so that users in the medical or architectural sector can reduce their costs and lead times.

In order to exploit the potential of its existing DeltaWASP 40100 system, the company has brought a continuous feed unit and robotic arms for the machine onto the market in addition to an “Industrial Clay” variant. Together, these new products are designed to provide users with a more consolidated, automated workflow, whether it’s separating flowing concrete and plastics or creating precise clay automobile prototypes.

Founded in 2012, WASP is a company dedicated to developing circular 3D printing technologies that enable sustainable building on a large scale. Since launching its first PowerWASP system, the company has built a strong portfolio of DeltaWASP 3D printers with liquid deposit modeling (LDM), including the latest 3MT, 4070 TECH, and 2040 iterations.

While each of these machines has the same delta coordinate setup, in which the stepper motors work in a triangular formation to precisely control the XYZ coordinates of their nozzle, they are optimized for 3D printing concrete, PEEK, and ABS, respectively.

In addition to the ‘Delta’ machines, WASP also sells its ceramic and quality-oriented ‘Clay’ and ‘Industrial’ systems as well as its modular ‘Crane’ units. In collaboration with the likes of Mario Cucinella Architects and Dior, the company continues to use the latter to reach new heights in sustainable living, first in 3D printing a “TECLA” eco-house, then a pop-up store on the beach in Dubai.

In contrast, last year the company introduced a unique hybrid prototyping approach within its clay portfolio that enables automotive users to shorten time-to-market without losing any of the craftsmanship in vehicle design A range of new products released that allow users to explore this potential application even further. 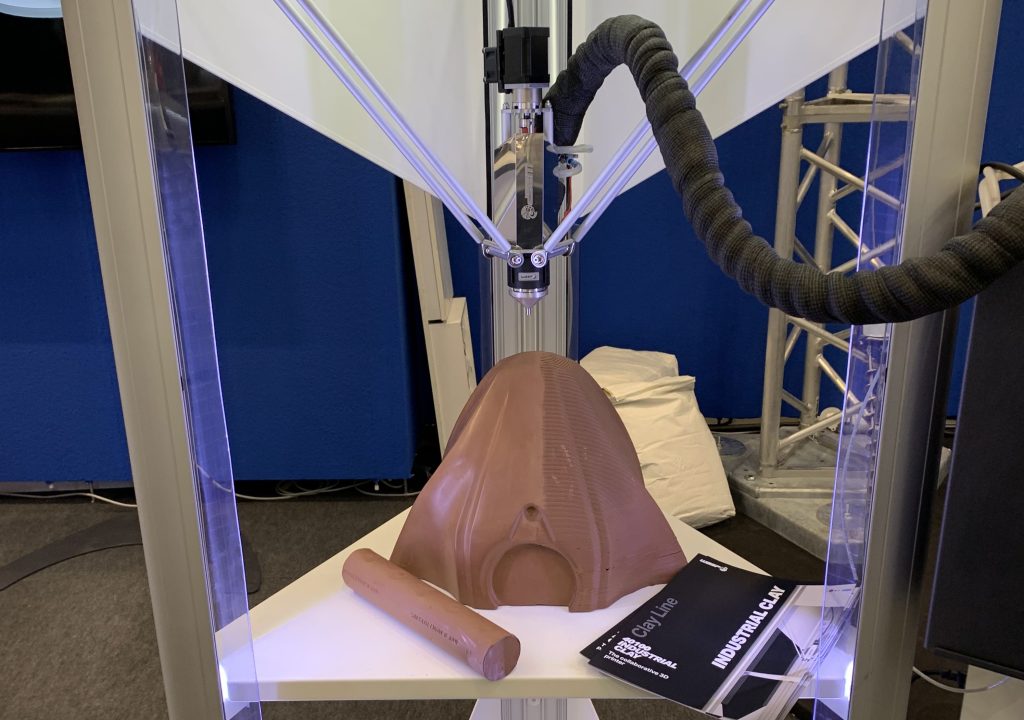 WASP dedicated one of its Formnext booths to its latest LDM advances, including the introduction of a remake of its 40100 machine. The 400 x 450 mm system known as “40100 Industrial Clay” has a screw-driven extruder that is compatible with 4, 6 and 8 mm nozzles and can print 1 mm layers at up to 150 mm / s.

Described by the company as a “collaborative 3D printer”, the Industrial Clay was developed together with Honda, especially for applications in automotive prototyping and product design. At its booth in Hall 12.0, WASP demonstrated how technology had enabled it to work with the Japanese automaker to develop practical models that enabled “unprecedented freedom in manufacturing”.

According to WASP’s Lorenzo Filipponi, the model of motorcycle on display was built using sound printing as part of an ongoing project between the companies in a compressed process that eliminates the need for milling and cuts lead time by around a third.

Filipponi also said that one of the main drawbacks of using his 40100 in the past has always been its limited powder capacity, which meant users often had to refill it multiple times when printing larger parts. The manufacturers were not only forced to spend their valuable time on laborious manual labor, but also risked the integrity of the models being endangered by air bubbles.

To solve this refilling problem, WASP also launched a continuous powder feed system at the fair. Weighing in at 30kg, the 11 liter titanium smart tank is compatible with nozzles up to 8mm wide, controllable material dosing and nylon wheels on the base, so users can fill up their machine conveniently and in a space-saving manner.

On the subject of automation, the company also presented a robotic arm system at its LDM booth that is capable of dispensing liquid-tight materials such as concrete and plastic granulate, which Filipponi says is intended to accelerate the prototyping of large-format parts, which was previously used in maritime research and development, to optimize yacht components. 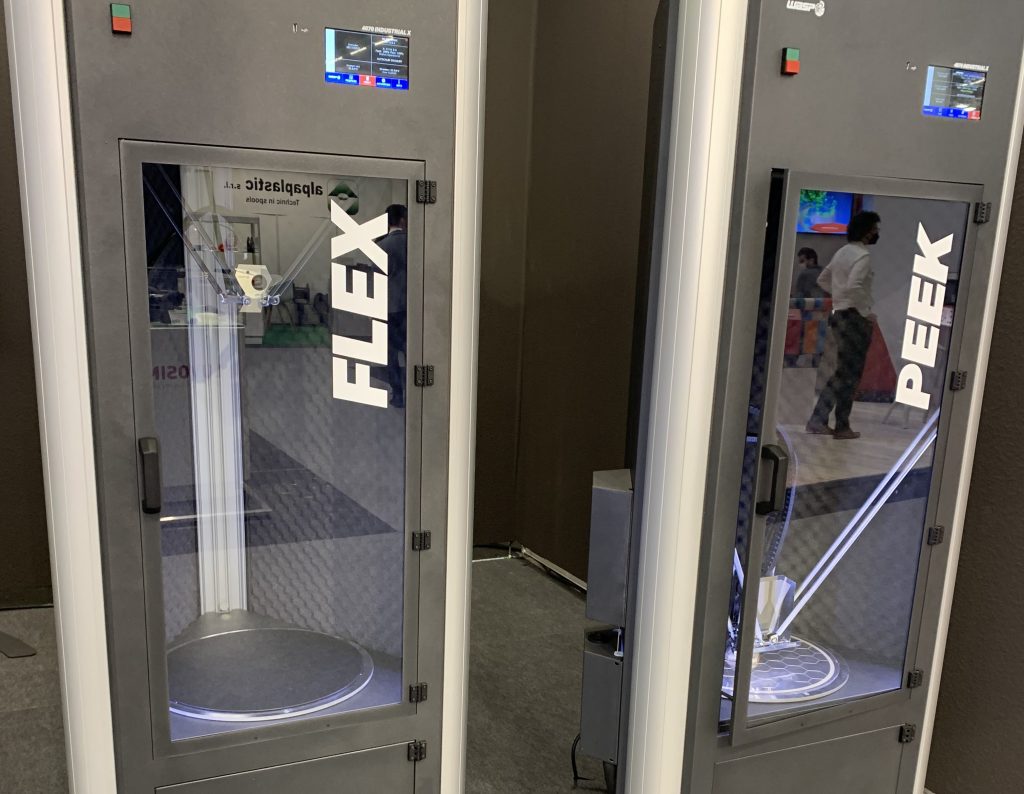 The new Flex and PEEK-optimized machines from WASP will be exhibited at Formnext 2021. Photo by Paul Hanaphy.

At its other stand on floor 12.1, WASP has revised its FDM offering with five new industrial line systems: 3MT HDP, 4070 HDP, 4070 TX, 4070 FX and 4070 ZX. With the first two, the company has launched two large-volume pellet extrusion machines that are designed to process recycled polymer granulate quickly, precisely, inexpensively and ultimately more sustainably.

Essentially, the 3MT HDP and 4070 HDP printers can achieve this thanks to their integrated HDP extruders, which rely on a capacitive sensor to continuously dispense granules when needed. Thanks to their integrated Firecap system, the machines also reach 250 ° without overheating, while their Vacuum Active Control plates enable parts to be exchanged quickly without impairing the processing quality.

Speaking to 3D Printing Industry at the booth, Camilla Bruno from WASP explained that these features allow the machines to produce enormous environmentally friendly architecture, and the 3MT HDP was presented live as a chair during the show.

Elsewhere, Bruno suggested that the company’s other four FDM 3D printers be built as more “streamlined” versions of its Industrial X machines. With each system now designed to process a specific type of carbon, pellets, PEEK, or polycarbonate, she added that “adjustments are no longer required” to switch between materials, making them ideal for specific medical or construction applications .

In practice this means that the Industrial FDM machines contain individual specialized extruders, in contrast to the dual extruder setup of the Industrial X. In addition, each system contains the same print bed, but their layout has been optimized for certain materials, for example 4070 TX has an inline filament drying system, while the 4070 FX can print on soft materials with a Shore hardness of 50 A.

For a deeper insight into additive manufacturing, you can now subscribe to our YouTube channel with discussions, debriefings and recordings of 3D printing in action.

Are you looking for a job in the additive manufacturing industry? Visit 3D Printing Jobs for a selection of jobs in the industry.

The picture presented shows the new Flex and PEEK-optimized machines from WASP, which will be exhibited at Formnext 2021. Photo by Paul Hanaphy.